As of the second quarter of 2021 (June 30), the Federal Reserve reports that public pension assets were a reported record $5.51 trillion, an increase of approximately 5.3 percent, from $5.23 trillion as reported for the prior quarter and higher than the same quarter one year ago by some $993 billion, or 22.0 percent. (Public pension assets, NASRA)

Nearly every state enacted significant reforms to its pension plans in recent years, and for many plans, one outcome is that more risk has been shifted from employers to employees through use of plan designs such as variable contribution rates, variable benefits, and hybrid plans, among other features. "In-depth: Risk Sharing in Public Retirement Plans" describes broad risk sharing features established in one or more public retirement plans, as well as detailed case studies on systems whose plan designs include unique or notable risk sharing features.

Public Fund Survey Summary of Findings Maintained and published annually by NASRA since 2001, the Survey is a narrative description and analysis, accompanied by graphics, that describes and presents current and trending vital financial, actuarial, and demographic statistics about public retirement systems. Access the latest summary here.

Selected Industry Resources and Reports This page provides a listing of resources and reports, maintained by NASRA and other organizations, presenting information and data about the broad public pension community. Access the listing here.

Roll Call Capturing notable events and developments in public retirement systems from reports since 2005, Roll Call is a perennial highlight of the annual conference. Members can view the most recent report as well as see previous years; login and then access it here. 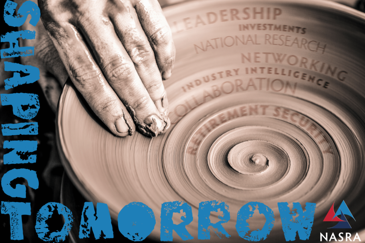 Interested in joining NASRA?   NASRA welcomes all public retirement systems to join; for those that do not meet the size and coverage requirements, an Educational Alliance Membership is available. Private sector firms working with public pensions can join as Associate Members or if space is available, as Premium Associate Members; click here for more information and to complete the short membership application. NASRA provides exceptional research, industry intelligence and networking opportunities for our country's largest statewide public retirement systems.  In 2021, the Winter Meeting was held February 22 to 24; the Annual Conference, 'Shaping Tomorrow' is coming up August 6-11, and both are open to members only, so join now for the latest in what's happening in public pensions.