To accommodate changing needs and fiscal landscapes, modifications to retirement plan designs and financing structures have a history in state and local government retirement plans. Since 2009, every state has made meaningful changes to their pension plan benefit structures, financing arrangements, or both. Many states have made such changes more than once. These changes are tracked and compiled by NASRA staff; these compilations are accessible on the right-hand side of this page. A key factor in evaluating changes is the extent to which they retain the core elements known to best meet human resource and retirement policy objectives of state and local governments: mandatory participation, shared financing, pooled investments, benefit adequacy, and lifetime benefit payouts. 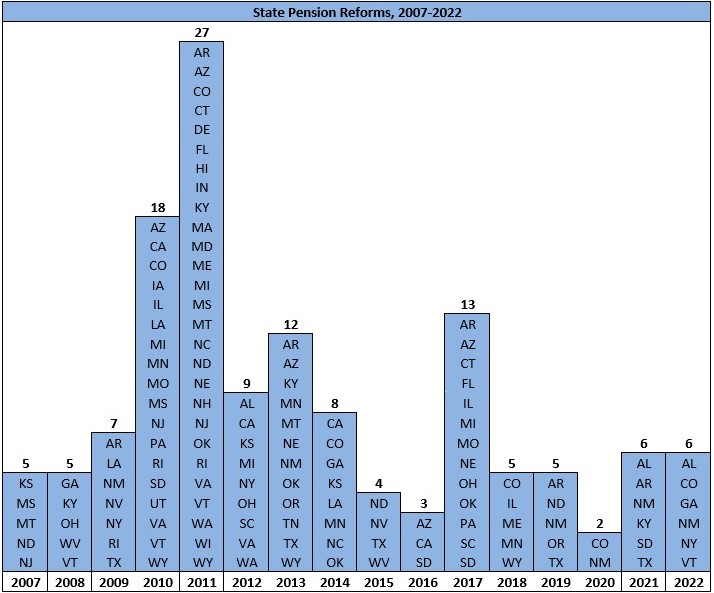 There has been no broad shift to defined contribution plans as the primary retirement plan, with most states electing instead to retain a reformed defined benefit plan either on its own or as a component of a combination (DB+DC) hybrid plan. Common types of reforms - some of which faced legal challenge - include higher employee contributions, lower benefit levels, increased eligibility requirements, and COLAs that were reduced, suspended, or eliminated.

Multiple methods of reforming a pension plan can result in lower benefit levels. These reforms include lower multipliers, increases to the period used to calculate an employee's final average salary, and an increase to the required age and/or years of service an employee must attain to qualify for a normal (unreduced) retirement benefit. Since 2009 40 states have enacted one or more of this type of change affecting one or more of their public pension plans.

Most - but not all - states provide an automatic cost-of-living adjustment (COLA) in some form on the pensions paid to retired public employees. Since 2009, 33 states reduced, suspended, or eliminated the COLA provided to retirees of one or more of their public pension plans. COLA changes fell into one of three categories - changes affecting new hires, current employees, or those already retired and receiving benefits. Notably, several states do not provide an automatic COLA, instead electing to provide COLAs on an ad hoc basis as approved by an entity such as the retirement board or the legislature.

As stated above, most states enacted these types of pension reforms within their existing defined benefit plan, rather than switching to another plan type. Some states however did elect to adopt a new plan type, which mostly typically was a hybrid plan classified as either a combination (DB+DC) hybrid plan, or a cash balance plan. Since 2009 11 states adopted one of these two hybrid plan types, which in most cases was applied to new hires only.