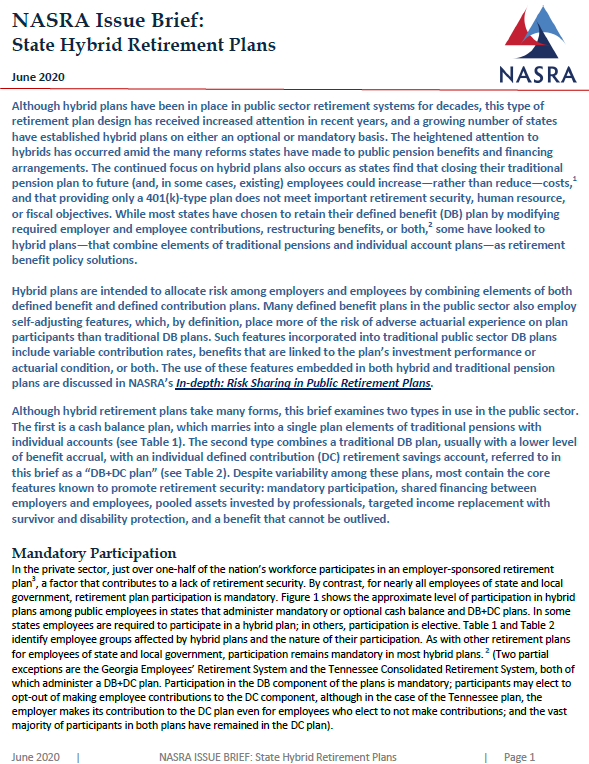 Although hybrid plans have been in place in public sector retirement systems for decades, this type of retirement plan design received increased attention in recent years, and a growing number of states established hybrid plans on either an optional or mandatory basis. The heightened attention to hybrids occurred amid the many reforms states made to public pension benefits and financing arrangements.

The continued focus on hybrid plans also occurs as states find that closing their traditional  pension plan to future (and, in some cases, existing) employees could increase—rather than reduce—costs, and that providing only a 401(k)-type plan does not meet important retirement security, human resource, or fiscal objectives. While most states chose to retain their defined benefit (DB) plan by modifying required employer and employee contributions, restructuring benefits, or both, some looked to hybrid plans—that combine elements of traditional pensions and individual account plans—as retirement benefit policy solutions.

Hybrid plans are intended to allocate risk between employers and employees by using elements of both defined benefit and defined contribution plans. Many defined benefit plans in the public sector also employ self-adjusting features, which, by definition, place more of the risk of adverse actuarial experience on plan participants than traditional DB plans. Such features incorporated into traditional public sector DB plans include variable contribution rates, benefits that are linked to the plan’s investment performance or actuarial condition, or both. The use of these features embedded in both hybrid and traditional pension plans are discussed in NASRA’s In-depth: Risk Sharing in Public Retirement Plans.

Although hybrid retirement plans take many forms, this brief examines two types in use in the public sector. The first is a cash balance plan, which blends elements of traditional pensions into individual accounts. The second type combines a separate traditional DB plan, usually with a lower level of benefit accrual, with an individual defined contribution (DC) retirement savings account, referred to in this brief as a “DB+DC plan”. Despite variability among these plans, most contain core features known to promote retirement security: mandatory participation, shared financing between employers and employees, pooled assets invested by professionals, targeted income replacement with survivor and disability protection, and a benefit that cannot be outlived.