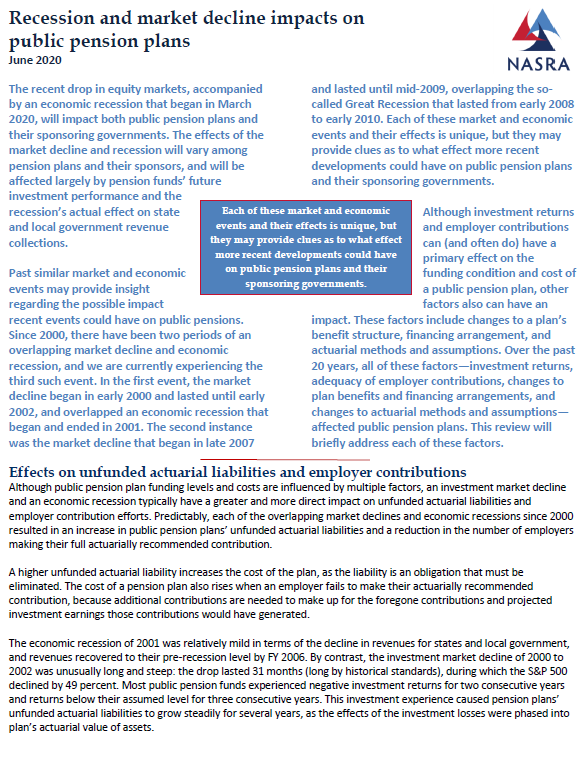 The recent drop in equity markets, accompanied by an economic recession that began in March 2020, will impact both public pension plans and their sponsoring governments. The effects of the market decline and recession will vary among pension plans and their sponsors, and will be affected largely by pension funds’ future investment performance and the recession’s actual effect on state and local government revenue collections.

Past similar market and economic events may provide insight regarding the possible impact recent events could have on public pensions. Since 2000, there have been two periods of an overlapping market decline and economic recession, and we are currently experiencing the third such event. In the first event, the market decline began in early 2000 and lasted until early 2002, and overlapped an economic recession that began and ended in 2001. The second instance was the market decline that began in late 2007 and lasted until mid-2009, overlapping the so-called Great Recession that lasted from early 2008 to early 2010. Each of these market and economic events and their effects is unique, but they may provide clues as to what effect more recent developments could have on public pension plans and their sponsoring governments.

Although investment returns and employer contributions can (and often do) have a primary effect on the funding condition and cost of a public pension plan, other factors also can have an impact. These factors include changes to a plan’s benefit structure, financing arrangement, and actuarial methods and assumptions. Over the past 20 years, all of these factors—investment returns, adequacy of employer contributions, changes to plan benefits and financing arrangements, and changes to actuarial methods and assumptions—affected public pension plans. This review will briefly address each of these factors.