Cost-of-living adjustments (COLAs) in some form are provided on most state and local government pensions. How public pension COLAs are calculated and approved varies considerably.

Approximately three-fourths of pension plans sponsored by states and local governments provide some form of an automatic cost-of-living-adjustment (COLA), i.e., one that does not require specific approval of or action by the plan sponsor (the legislature or city council). Other types of COLAs among plans in the public sector are ad hoc COLAs, which are increases to annuitants’ benefits resulting from specific action by the plan sponsor; and investment-based COLAs, which increase annuitants’ benefits when the pension fund’s investment performance surpasses a designated benchmark.

The purpose of the COLA is to offset, or reduce, the effects of inflation on an individual's retirement income.

The Bureau of Labor Statistics measures inflation by calculating the Consumer Price Index for Urban Workers (CPI-U), which measures changes on prices paid by urban consumers on representative goods and services. The chart below plots the rate of inflation for each year ended in May. The average annual rate of inflation over this 25-year period is 2.12%. 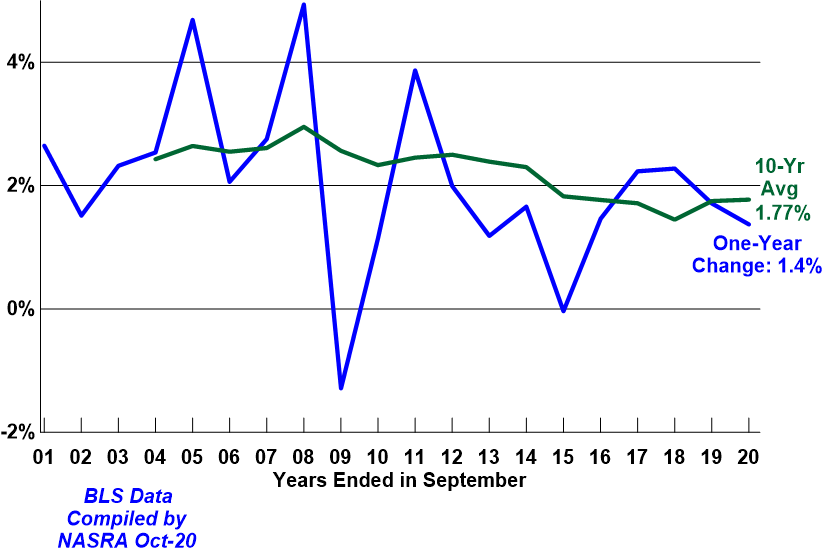 In the wake of the 2008-09 market decline, many states have altered their COLA provisions for newly-hired workers. Some states altered COLA provisions to also affect retired members, active members, or both. These states include Colorado, Florida, Maine, Maryland, Minnesota, New Jersey, New Mexico, Oregon, and South Dakota. Information about these and other reforms made to public pension plans is available here.