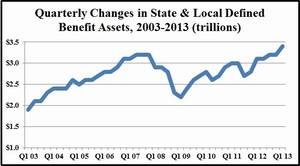 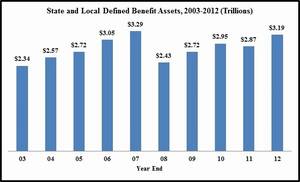 NASRA tracks total financial assets held by state & local government retirement funds on a quarterly and annual basis. Data is provided by the U.S. Federal Reserve System and is compiled by NASRA staff.

The Federal Reserve reported in March that the combined value of defined benefit plan assets held by state and local governments as of Q4 2012, increased to $3.05 trillion, from $2.82 trillion as of Q4 2011. The data is reported in the Flow of Funds report for March 2013.