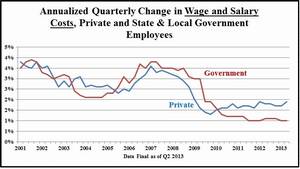 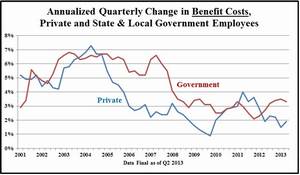 NASRA reports on trends in private sector and state & local government employee costs of compensation and benefits. The Employment Cost Index (ECI) measures the change in the cost of labor through compensation (including wages and salaries and benefits) and is produced by the U.S. Bureau of Labor Statistics on a quarterly basis.

The second quarter of 2013 marked the 16th straight quarter of annualized growth below 2.0 percent in the cost of government employee wages and salaries, and the 17th such quarter for private sector employee wages according to data released by the Bureau of Labor Statistics.

Governing has compiled 2010 and 2011 state government employment and pay data which is offered in an online database.