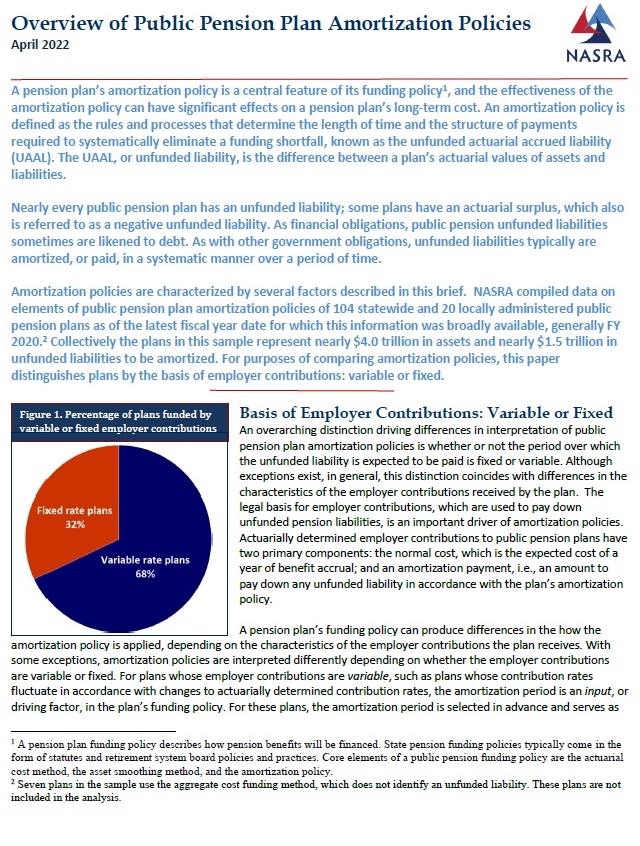 A pension plan’s amortization policy is a central feature of its funding policy, and the effectiveness of the amortization policy can have significant effects on a pension plan’s long-term cost. An amortization policy is defined as the rules and processes that determine the length of time and the structure of payments required to systematically eliminate a funding shortfall, known as the unfunded actuarial accrued liability (UAAL). The UAAL, or unfunded liability, is the difference between a plan’s actuarial value of assets and its liabilities, which are the accumulated value of benefits earned by plan participants.

Amortization policies are characterized by several factors described in this brief. NASRA compiled data on elements of public pension plan amortization policies of 104 statewide and 20 locally administered public pension plans as of the latest fiscal year date for which this information was broadly available, generally FY 2020. Collectively the plans in this sample represent nearly $4.0 trillion in assets and nearly $1.5 trillion in unfunded liabilities to be amortized. For purposes of comparing amortization policies, this paper distinguishes plans by the basis of employer contributions: variable or fixed.